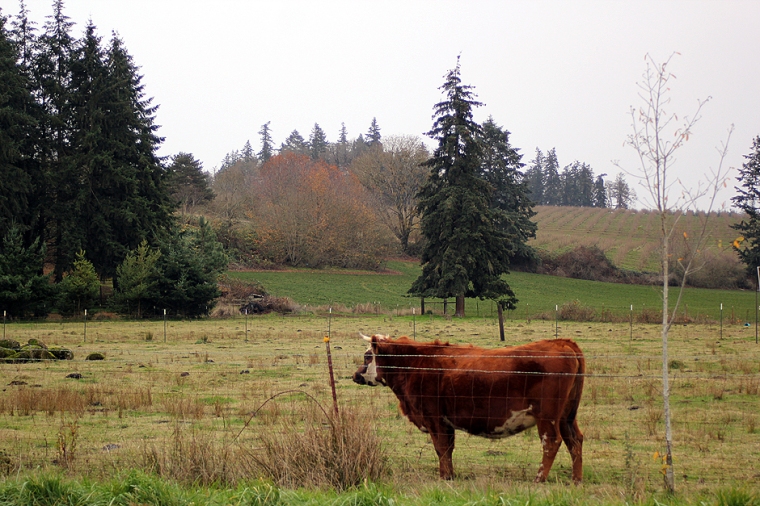 On the way to a small town (population < 400) called Scotts Mills, my husband and I were wondering what caused the cars to stall. It so happened that a black cow escaped the farm and was causing traffic. At first, it was in front of us, but since the cars started moving, we passed it and it ran behind our car. Two people, presumably the caretakers, went after the cow as it ran across the street into someone’s property. I wish I was quick enough to take a picture of the runaway cow. I may have missed that one, but I ended up taking a picture of a red heifer instead. 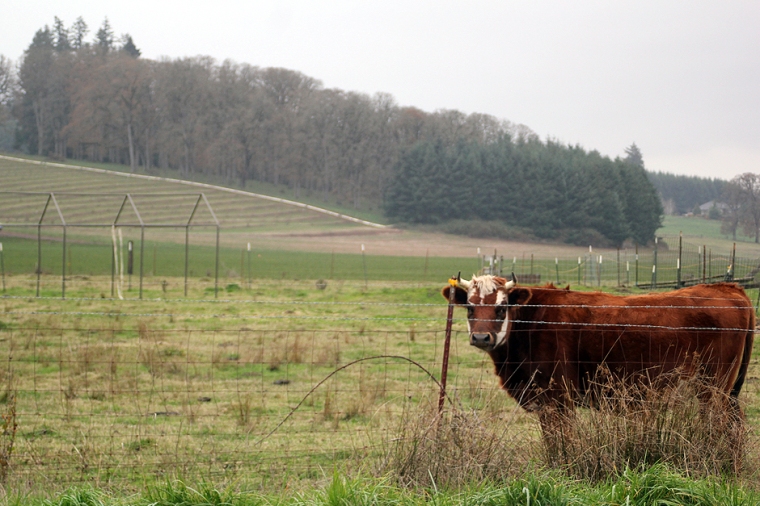 The red cow was looking elsewhere so my husband was mooing. Instead of “Moo,” he said “Mooow” to get its attention. If the cow could have talked, I’m pretty sure it would have said, “You’re not my type.”

All Israel Will Be Saved

25 I do not want you to be ignorant of this mystery, brothers and sisters, so that you may not be conceited: Israel has experienced a hardening in part until the full number of the Gentiles has come in, 26 and in this way all Israel will be saved. As it is written:

“The deliverer will come from Zion;
he will turn godlessness away from Jacob.
27 And this is my covenant with them
when I take away their sins.”

Israel has experienced a hardening in part until the full number of the Gentiles has come in – With the trending godlessness and ideologies promoting population control, we could well be expecting this prophecy coming to pass in our time.

“The Lord said to Moses and Aaron: 2 “This is a requirement of the law that the Lord has commanded: Tell the Israelites to bring you a red heifer without defect or blemish and that has never been under a yoke.”

“The blood of goats and bulls and the ashes of a heifer sprinkled on those who are ceremonially unclean sanctify them so that they are outwardly clean. 14 How much more, then, will the blood of Christ, who through the eternal Spirit offered himself unblemished to God, cleanse our consciences from acts that lead to death, so that we may serve the living God!

15 For this reason Christ is the mediator of a new covenant, that those who are called may receive the promised eternal inheritance—now that he has died as a ransom to set them free from the sins committed under the first covenant.”

How sure are we that the third temple will be rebuilt?

Jesus referred to the coming temple in Matthew 24:15, “So when you see standing in the holy place ‘the abomination that causes desolation,’ spoken of through the prophet Daniel—let the reader understand—”

While there are red cows all over the planet, the raising of the red heifer prescribed for the sacrificial offering is a monumental task in Israel, but they have been doing all the preparations necessary to resume the sacrifices and are waiting for their temple to be rebuilt.

A political figure will make this possible for the Jewish people and will “set himself up in God’s temple, proclaiming himself to be God.” – 2 Thessalonians 2:3-4

“He will confirm a covenant with many for one ‘seven.’ In the middle of the ‘seven’ he will put an end to sacrifice and offering. And at the temple he will set up an abomination that causes desolation, until the end that is decreed is poured out on him.”

“From the time that the daily sacrifice is abolished and the abomination that causes desolation is set up, there will be 1,290 days.”

The God of Abraham, Isaac and Jacob is so precise. He warns the Jewish people to flee to the mountains (Matthew 24:16) where they will be protected (Revelation 12:14) when the abomination that causes desolation (Revelation 13:14-15) is set up. This time would be such “days of distress unequaled from the beginning, when God created the world, until now—and never to be equaled again.” (Mark 13:19)

“As Scripture says, “Anyone who believes in him will never be put to shame.” 12 For there is no difference between Jew and Gentile—the same Lord is Lord of all and richly blesses all who call on him, 13 for, “Everyone who calls on the name of the Lord will be saved.”

“If you believed Moses, you would believe me,
for he wrote about me.”