This post is a response to a deceptive antisemitic teaching that is circulating here in WordPress. I made a comment to a commenter on this blogger’s post and the blog owner decided to delete the entire exchange. He has every right to moderate the comments because it is his blog.  However, I will make my comments and his response that was saved on my email notification as snapshots public here.

To those who cling to AntiZionism, below is what the Word of God says of Zion:

14 Sing, Daughter Zion;
shout aloud, Israel!
Be glad and rejoice with all your heart,
Daughter Jerusalem!
15 The Lord has taken away your punishment,
he has turned back your enemy.
The Lord, the King of Israel, is with you;
never again will you fear any harm.
16 On that day
they will say to Jerusalem,
“Do not fear, Zion;
do not let your hands hang limp.
17 The Lord your God is with you,
the Mighty Warrior who saves.
He will take great delight in you;
in his love he will no longer rebuke you,
but will rejoice over you with singing.”

If I address a very serious belief which is dangerous and heretical, I save a copy of my comments because some of them either go to spam or the bloggers just trash it. I mainly wanted to address the commenter.

Below is the continuation of my truncated address to Jackie which contained mainly verses which I also asked her thoughts on Israel.

Lee – “I believe that the Israel of God are those persons who are in Christ.”

25 For I would not, brethren, that ye should be ignorant of this mystery, lest ye should be wise in your own conceits;that blindness in part is happened to Israel, until the fulness of the Gentiles be come in. And so all Israel shall be saved: as it is written, There shall come out of Sion the Deliverer, and shall turn away ungodliness from Jacob: 27For this is my covenant unto them, when I shall take away their sins.

17 Therefore say, Thus saith the Lord GOD; I will even gather you from the people, and assemble you out of the countries where ye have been scattered, and I will give you the land of Israel.

Israel ALWAYS referred to God’s chosen people. The jews that inhabit[s] the State of Israel now are the very descendants of those who were scattered among the nations. Read Ezekiel 36:19-20,24. Spiritualizing a literal people is the very definition of Replacement theology which is making God’s Word say something other than what it states… 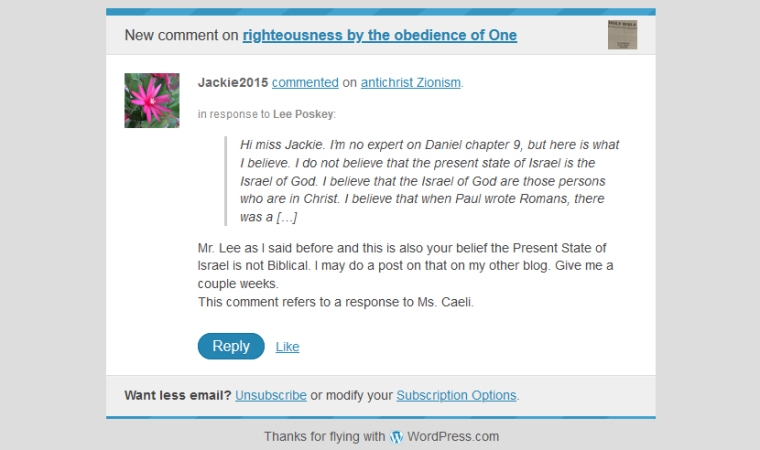 I asked Jackie why she needed two weeks to tell me why she thought the verses I quoted were out of context. It is only fair to know why someone gives you an opinion and expect to hear their reasoning for holding to their position. It’s the same with Fake news. Will you believe them when they tell you something without an explanation/evidence? 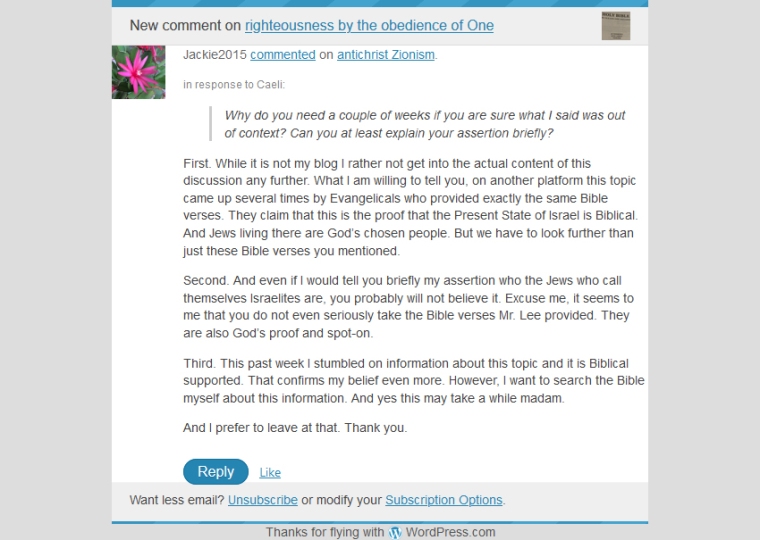 I respect Jackie’s decision to ‘leave it at that’. However, I would have really wanted to know what it was I misquoted so I could look into it. 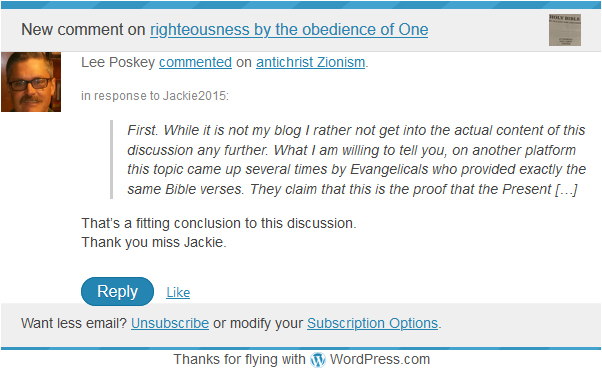 The blog owner decides to get into the conversation

“you still haven’t responded to the verses that I presented to you via a link to one of my posts.”

Lee, I am well aware of your ‘no debating’ position so I addressed Jackie specifically because I read in your blog comment to her you have not changed your position on Israel since we last spoke, but thank you for adding it in this comment.

To summarize all your verses, we become heirs of the promise. No one disputes that. Our being grafted in does not in any way cancel the Jews. We all become believers of the Messiah, all one in Christ with no distinction, neither Jew nor gentile.

“But the hour cometh, and now is, when the true worshippers shall worship the Father in spirit and in truth: for the Father seeketh such to worship him.” John 4:23.

Salvation is of the Jews in Jesus’ own words (John 4:22). Does that cancel the literal Jews? Of course not. Jesus acknowledges them. We refer to the Jews as a people specific to the descendants of Jacob (Israel, hence Israelites).

16 And as many as walk according to this rule, peace be on them, and mercy, and upon the Israel of God.”Galatians 6:16

Who do you think is the “them” referring to in this verse? The verse includes ‘them’ and all those who believe in Christ.

“18 Boast not against the branches. But if thou boast, thou bearest not the root, but the root thee.” Romans 11:18

I ended at this and the blog owner leaves me with a final thought before deleting all the comments.

I wish the blogger decided to keep the whole thing over at his blog. The exchange which in my opinion was civil, would have let the readers come to their own conclusions.

Merriam Webster’s definition of patriotism verbatim is love for or devotion to one’s country.

Jesus the Messiah is a Jew. Let’s look at Zephaniah 3 to see if it does not hold to ‘patriotic’ sentiments.

14 Sing, Daughter Zion;
shout aloud, Israel!
Be glad and rejoice with all your heart,
Daughter Jerusalem!
15 The Lord has taken away your punishment,
he has turned back your enemy.
The Lord, the King of Israel, is with you;
never again will you fear any harm.
16 On that day
they will say to Jerusalem,
“Do not fear, Zion;
do not let your hands hang limp.
17 The Lord your God is with you,
the Mighty Warrior who saves.

If this kind of patriotism is sin, then it does not belong in the Word of God.

The very same blogger who pushes his antisemitic antizionism makes a post alluding that those who want to preserve our country’s dwindling religious freedom worship Trump. I am not offended by this. {NONE of the Trump voters that I know of make him to be their god.} The part I do take offense was not in the post itself, but the underlined red part in the comment. If speaking up against antisemitic Replacement Theology is “rejecting the truth of God’s Word,” may the Lord help us discern the truth.

Watch out for deceivers.

“Better to correct someone openly than to let him think you don’t care for him at all.”

12 thoughts on “Zionism/Patriotism: As Biblical As It Gets”