It’s snowing today. It looks quite dreary and miserable but one little critter made my day. Woke up at 4 AM and was never able to go back to sleep. I suppose going to a Chinese Buffet the night before does that to you. We are still trying places to find out which one has the tasty stuff.

Anyway, this little thing is nibbling what looked like an Oreo cookie. I took another shot when it ran across the fence. I suppose one of the neighbors gave it to this little guy. 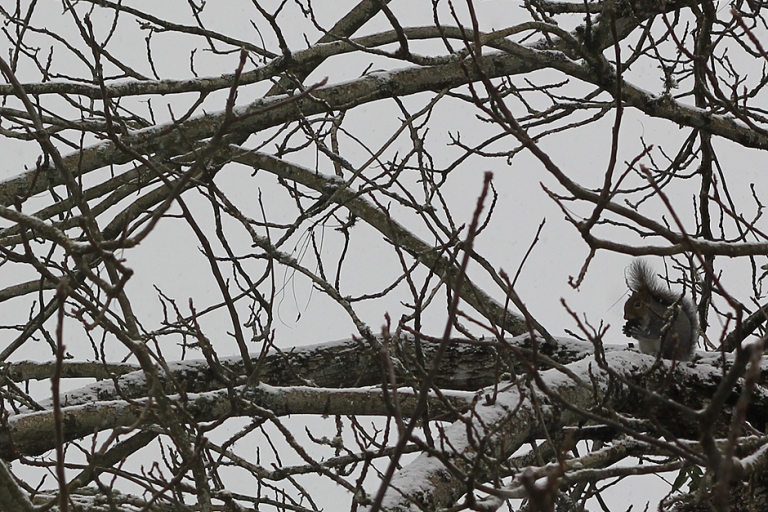 Another thing… This post isn’t just some aimless whatever post but I wanted to react about something I read today in the blogosphere repudiating “Evangelicals” and crediting Trump’s “disastrous” victory to them and therefore disavowed herself from being one. I’m not writing this to pick a fight as everyone definitely has the right to voice out how they feel but the sentiment in my opinion was uncalled for, to say that she no longer identifies as an Evangelical because of how the election turned out. I mean really? Are you going to let liberalism dictate your identity (unless you believe you are saved but aren’t)? Do you even know what true evangelicalism means?

It only shows the superficiality yet severity of the sentiment. Whether it was an absolute serious statement or not, I just want to say no professing Christian or liberal will make me feel ashamed for voting Trump. I voted for him factoring in his prospective foreign policy- Pro-Israel stance, though he is not the paragon of virtue that every Christian expects a leader to be, we are not electing a spiritual leader and to slap qualifications for a deacon to this man would be erroneous. People voted Barack Obama and bought his then prospective pitch of “Hope” and no one seemed to have an issue with that even though it is quite evident the opposite was achieved.

Could Trump be the Antichrist? Who knows? Nobody knows… Also, people, especially Christians, I mean liberal Christians ought to remember Daniel 2:21,

“He changes times and seasons; he deposes kings and raises up others. He gives wisdom to the wise and knowledge to the discerning.“

Some people liken Trump to King Saul, and some say Trump might be Cyrus. Whatever and whoever President elect Trump turns out to be, whether people like it or not, God allowed it, just as God allowed Hitler and caused things to work for good (Romans 8:28) towards His chosen people to desire to reestablish Israel, a fulfillment of biblical prophecy. We may not like Trump but God put him there for a reason. This is all we have to remember.

So… If a professing Christian distances his/herself from being called an Evangelical because of this election, I think that person is admitting and coming out of the closet that they do not adhere to true biblical teaching because let’s face it, if Trump would not have won, it would be a default to Hillary Clinton who would have continued the anti-biblical legacy of Barack Obama. Believe it or not, that is a serious statement if you truly look at it especially coming from someone who claims to love the Lord.

There is truly a dearth of discernment plaguing the body of Christ today and it only shows we ought to be even cautious about every person who claims to be a believer in Christ.

Christian. Wife. Mother. "The one who lives under the protection of the Most High dwells in the shadow of the Almighty. I will say concerning the Lord, who is my refuge and my fortress, my God in whom I trust" ~ Psalm 91:1-2 ~ [Umbrella girl avatar by Mark Crilley] View all posts by Caeli