As mean as this sounds, I can’t think of anything else but “Good riddance to bad rubbish” when I think about Jezebel. Some commonly use her name to allude to someone who is a traitor and or a seductress. Who was she anyway and why was she the most wicked woman recorded in the world’s best selling book, the Bible? Below is a crash course on Jezebel and why her wickedness is forever to be remembered. It is straight copy and paste verbatim of her story as written in the NIV. I intended to do this so you don’t have to grab your bible since it’s right here.

Ahab Becomes King of Israel – 1 Kings 16:29-33
“In the thirty-eighth year of Asa king of Judah, Ahab son of Omri became king of Israel, and he reigned in Samaria over Israel twenty-two years. 30 Ahab son of Omri did more evil in the eyes of the Lord than any of those before him. 31 He not only considered it trivial to commit the sins of Jeroboam son of Nebat, but he also married Jezebel daughter of Ethbaal king of the Sidonians, and began to serve Baal and worship him. 32 He set up an altar for Baal in the temple of Baal that he built in Samaria. 33 Ahab also made an Asherah pole and did more to arouse the anger of the Lord, the God of Israel, than did all the kings of Israel before him.”

Jezebel’s Violent Death – 2 Kings 9:30-37
Now when Jehu had come to Jezreel, Jezebel heard of it; and she put paint on her eyes and adorned her head, and looked through a window. 31 Then, as Jehu entered at the gate, she said, “Is it peace, Zimri, murderer of your master?”
32 And he looked up at the window, and said, “Who is on my side? Who?” So two or three eunuchs looked out at him. 33 Then he said, “Throw her down.” So they threw her down, and some of her blood spattered on the wall and on the horses; and he trampled her underfoot. 34 And when he had gone in, he ate and drank. Then he said, “Go now, see to this accursed woman, and bury her, for she was a king’s daughter.” 35 So they went to bury her, but they found no more of her than the skull and the feet and the palms of her hands. 36 Therefore they came back and told him. And he said, “This is the word of the Lord, which He spoke by His servant Elijah the Tishbite, saying, ‘On the plot of ground at Jezreel dogs shall eat the flesh of Jezebel;[b] 37 and the corpse of Jezebel shall be as refuse on the surface of the field, in the plot at Jezreel, so that they shall not say, “Here lies Jezebel.”’”

Wow, she was quite some woman huh? I’m glad you stuck around. Do you know someone who might be under the influence of the spirit of Jezebel? Believe it or not, asserting Feminism is a Jezebel-like trait because it is accompanied by none other than rebellion and challenging what is revealed in God’s word. Genesis 2:15 accounts God appointing man to work and be in charge of the whole garden, and Genesis 2:18 clearly indicates a woman’s role as the helper.

Why address this? Because it is obvious the same spirit working in Jezebel in her time is the same spirit roaming around to influence women of today, even some professing Christians who have the spirit of defiance and has not yet learned submission. Honestly I can be defiant when I don’t walk in the Spirit (Who isn’t?) but if we truly love God, we are to do what the Bible teaches regarding how wives ought to conduct themselves toward their husbands (Ephesians 5:22). It is all the more expected from women who profess to follow Christ because it differentiates us from the rest of the world. Being submissive does not actually make me feel like a second class citizen. On the contrary, when women do that, it is making a conscious decision to practice humility and meekness, Christlike traits. It’s definitely hard at times but with the Holy Spirit’s help, it is attainable.

I can say unequivocally that Beyonce (a.k.a. Sasha Fierce – I feel even sad for her because she had some semblance of Christianity when she was young) is the number one proponent of this spirit. I am not being judgmental but no amount of professing to be a follower of Christ can nullify the act of being an enabler of men’s downfall especially when men are struggling from lust/porn addiction. I don’t blame her per se, but the spirit that takes hold of her which enables her to be different from her normally “reserved” self. Then there’s Rihanna, Ke$ha, The Kardashians, and plenty of others in the entertainment industry. These people are far from being positive role models to women and yet they are highly esteemed with their lifestyle of fame, blatant love for mammon and crass materialism, promiscuity and failed marriages (Kardashians).

I was in bed when the thought came to me to write about Jezebel. As I was looking for a picture to put up for this post, I stumbled upon a fellow blogger’s image via Google (which happens to have a list on it too, how convenient) and as I read through it, I conclude it is a concise description of the essence of Jezebel prevalent in our society. I have refrained from reading the original post since I did not want to taint whatever thoughts I had for this entry. However, I couldn’t pass up on sharing her list via this image which by the way is clickable to redirect to the original post. 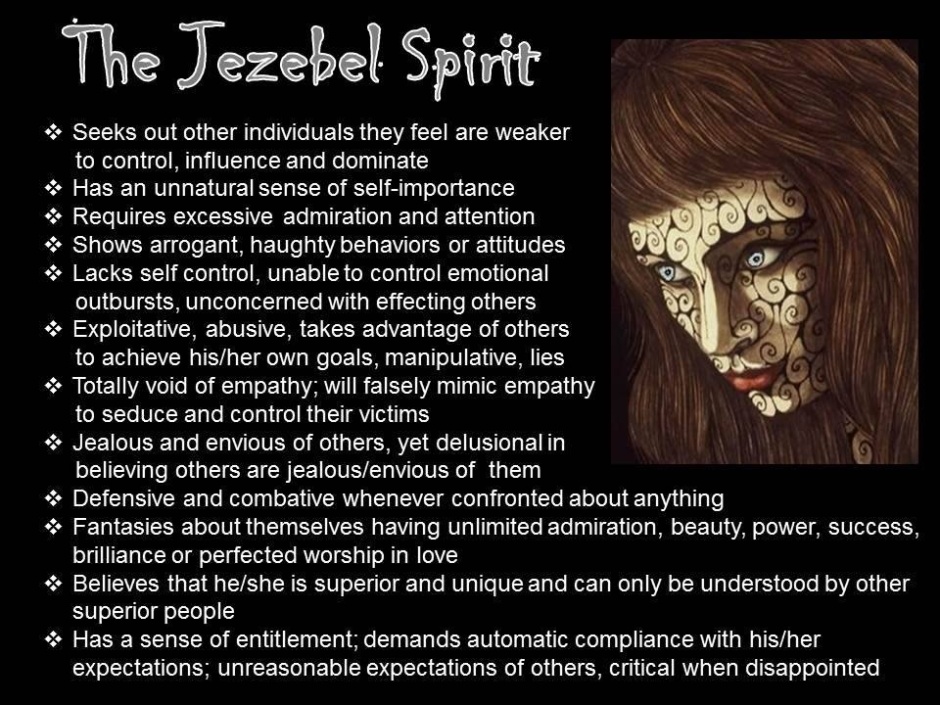 The essence of Jezebel can be found in Revelation 2:18-26. I don’t doubt Jezebel had the characteristics listed above because the Bible also warns believers that “For where jealousy and selfish ambition exist, there will be disorder and every evil practice“ in James 3:16. She was an idolater in the highest degree which caused the Kingdom of Israel to keep them completely from ever seeking God by giving the order to kill the prophets (1 Kings 18:4). Her idols robbed the glory that was due to none other than God. Imagine a mere creation setting herself up to be God’s enemy.

If you suspect you may have the Jezebel syndrome, (can you identify yourself with a few traits within the list?) you got all the chance in the world to get delivered from this. If you are a believer, repent. For those who do not happen to know the Lord, it is as simple as asking Jesus Christ to be your Savior and meaning it with your heart, mind, and soul that you want to be delivered from such demonic influence. Help is only one sincere prayer and lifechanging decision away.

13 thoughts on “That Woman Named Jezebel”